The CCTV video is typically carried in coaxial cables with two conductive wires used for CCTV video signals. The CCTV video signal transfer will be attenuated easily by the cable/connector. A passive Video balun is used in a CCTV system to achieve the following goals: 1, To eliminate or reduce high-frequency noise and hum; 2, To prevent cable thieves from accessing CCTV equipment such as cameras and DVRs. 3, To extend CCTV installation at remote places. So we use a coaxial 75 ohm female output connector at the DVR end and a male BNC connector at the camera end. CCTV Video Balun Price starts from 150 Taka per pcs.

When installing CCTV, the requirements for wiring are specific. Cable TV wire is typically made of copper, which doesn’t transmit signals as well as copper wire. A workaround is to use twisted pair cable. Twisted pair cable is made up of pairs of wires that are twisted around one another to reduce interference. CCTV video baluns allow for this type of cable to be used in security camera installations, both for CCTV cameras and HD security cameras. 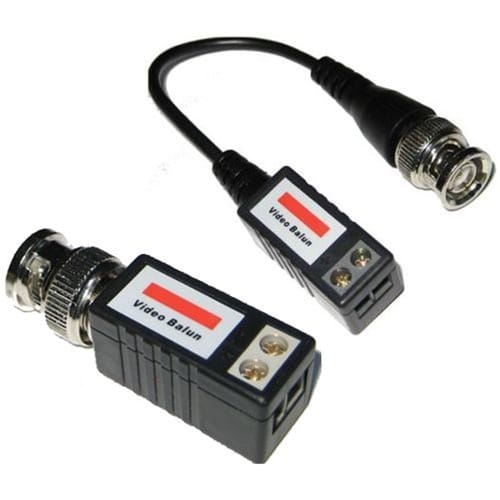 CCTV video baluns are used with security camera systems to allow for the transmission of digital signals. They were originally designed in 1990’s when twisted pairs wires were seen as a more cost-effective alternative to coaxial cables, which is still often done in CCTV video installations. Using twisted pair wire allowed for flexibility in the placement of cameras, so if one needed to be moved, the wires could be moved without cutting into the power or data line.

CCTV video baluns, also known as UTP baluns and CAT5 baluns, allow CAT-5 cable and other twisted pair wire to be used in CCTV camera and HD security camera installations. These baluns can be located on the camera end of the cable run or installed in a junction box. The installation process is simple and does not require any special tools.